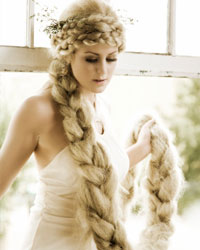 Fantasy, enchantment, dreams, myths, spiritual beings, angels, fairies are all concepts which fill the Lavenders' mind. Lavenders tend to live in a fantasy world. They prefer to spend their time out of their bodies, where life is pretty and enchanting. It is challenging for these airy beings to live in three-dimensional reality. Lavenders prefer imaginary pictures of the world, seeing butterflies, flowers and wood nymphs rather than dirt, concrete and large cities. Physical reality seems cold and harsh to them. These sensitive creatures are fragile and frail, and their physical appearance is often weak and pale. Lavenders' skin is often alabaster white because they don't like being outdoors, unless it is to be gently surrounded by beautiful flowers and gardens. These child-like personalities are sensitive and simple. Lavenders would rather spend time watching clouds float by or daydreaming. They prefer to escape this reality with all of its demands and responsibilities. The Lavenders behavior tends to frustrate others who may expect them to be dependable and responsible. Lavenders have no understanding of what it means to hold a responsible job or to earn money. They are more familiar with other dimensions and imagined realities. Lavenders even have a difficult time relating to or connecting with the concepts of time, space and physical matter. They tend to experience events in their imaginations, but they are not usually grounded enough in physical reality to actually accomplish anything tangible.

These childlike personalities are sensitive and creative. The Lavenders' innate ability to use their imagination makes them extraordinarily creative. They are also highly intuitive. Using common sense, logic, and reason, however, is not easy for these gifted spirits. Lavenders are gentle and free spirits who are not attached to following rules or being limited by systems that dictate how they should live. They live by their feelings and intuition, rather than by their intellect. They want to be free to move in whatever direction feels right at the time, and their directions change as often as the clouds do. In power, Lavenders can be very entertaining and educational. Through their visual and imaginative styles, they have a unique ability to take people into fantasy worlds that are alive with feelings, sensations, and sounds. They can take people beyond their limited reality into a world filled with possibilities. Because of their creative talents, Lavenders make excellent artists and writers. Painting pictures of castles in the sky or writing about mythological characters appeals to these whimsical beings. In power, Lavenders have the ability to transform their imaginings into works of art, thereby enhancing the lives of others. Out of power, Lavenders can feel lost and confused. They are typically unrealistic, irresponsible, and spacey. They like to dream and fantasize, but don't usually follow through with their ideas. They would rather spend time daydreaming or watching clouds float by. They prefer to escape this reality with all its demands and responsibilities. Lavenders need to be with people who can see the potential in their creativity and lofty ideas, and who are capable of forming plans and taking action. Lavenders need very loving and patient partners. If treated with gentleness and kindness, these loving Lavenders will be gracious, sensitive, appreciative, and dedicated mates. Partners can ultimately find the Lavenders' innocence and creative imaginations endearing and lovable. Lewis Carroll (Alice in Wonderland) and C.S. Lewis (Chronicles of Narnia) both had Lavender in their auras.

Lavenders see life as a magical world of adventure filled with fantasy, enchantment, dreams, myths, and spiritual beings. Lavenders are not here to make a social statement, change the planet, or rescue others. They are here to stimulate our imagination, to inspire our sense of wonder, and to keep the idea of magic alive in us. It is challenging for these airy beings to live in three-dimensional reality. Lavenders are gentle spirits who just want to be free to explore their imagination and experience other realities. They change their direction as often as clouds. Many Lavenders are storytellers, dancers, artists, costume designers, writers (especially children’s books), mimes, interior decorators, and set designers.

If you’re going to be in a relationship with Lavenders, this is what you may want to know. Lavenders are lovely, sensitive, whimsical creatures. They are innocent and childlike, wonderful explorers of the imagination. Daydreaming is one of their greatest pleasures. Lavenders are gentle free spirits who are not happy following rules. These fragile beings need partners who are willing to provide a beautiful, stress-free environment for them, rather than insist they become anything other than the gentle souls they are. Lavenders are happiest when they have partners who are willing to handle all the financial matters and take care of all the day-to-day responsibilities. They would rather be playfully creating than working or facing the harsh realities of the world. They need partners who can make them feel safe and nourished.

Lavenders are pleasant and friendly, but they work best in quiet, low-stress environments that allow them plenty of time to daydream and create. Working regular office jobs is painful for them because too much mental concentration is required. Lavenders do not like calculating or analyzing details, nor can they be expected to organize anything. They are too forgetful and scattered. They even have trouble remembering their customers’ orders in restaurants. Lavenders do not like to be burdened by too many responsibilities. They will not be rushed or pressured. Careers in art or theater appeal to Lavenders because they have the opportunity to explore their imagination and creativity. These free spirits will frequently create through many art forms. Occupations that are attractive to Lavenders include the following: Storyteller, Dancer, Set designer, Actor, Interior decorator, Costume designer, Mime, Teacher, educator, Artist (especially fantasy art), Writer (especially children’s books).

Lavenders have a difficult time understanding money. Financial obligations are not only burdensome, but are too much a part of physical reality. Money is also physically dirty and unappealing to them. These childish personalities prefer to escape into other realities where everything they want is easily manifested. Lavenders feel that if money is to exist at all, it should be used to obtain pretty clothes, crystals, ornamental jewelry, or other fanciful items. They resent having to put their energy into working hard at jobs they dislike just to pay for such basics as rent and car payments. The kinds of lives in which people must struggle just to have money is not worth living for Lavenders. Because Lavenders don’t understand such complicated concepts as budgets, investments, or financial planning, they can easily get into financial trouble. They spend money as fast as they get it; consequently, they can become overwhelmed with debts. Lavenders need to either find a fun and imaginative way to learn how to effectively manage their money or find someone who can manage it for them. Success Lavenders want the freedom to live the way they want and where they want, whether that means living in or out of their bodies, in physical reality, or in other dimensions. They prefer to live out of the reach of critical, non-accepting realists who try to force them to live in a three-dimensional world, preferring a simple and fanciful world where they can freely roam with their imagination. Their ultimate joy is to be financially supported so they have the freedom to be creative dreamers. Although other colors such as Greens prefer to work, to be mentally challenged, and to accomplish, Lavenders prefer the opposite. They enjoy relaxing so that they are free to dream.

Because Lavenders spend little time in their bodies, they can have frequent and varied health problems. Because they do not always send life energy through their bodies, everything from their skeletal structures to their organs can suffer. Lavenders are not very attached to their physical bodies. If they feel pain or discomfort, they merely leave their bodies rather than deal with whatever warning signs they are receiving. They are not always aware of the benefits of good nutrition, exercise, or preventive medicine. There are no specific areas in which Lavenders commonly experience health problems. But a lack of life energy can cause the entire body to slowly deteriorate. If Lavenders stay in power and spend more time focused in their bodies, however, they have a remarkable ability to heal their bodies by using their imagination. Lavenders are adept at imagining the “dragons” (cancer cells) being killed by the “white knights” (white blood cells) in their bodies. By focusing their imagination on healing, Lavenders can effectively cure their ailments. To stay healthy, Lavenders must remember they have physical bodies and they should take realistic, tangible steps to take care of them. Eating healthy foods and exercising are good beginning steps. Floating in and out of their bodies can be beneficial for Lavenders. Leaving their bodies relaxes them and reduces stress. Spending too much time in physical reality can create stress-related problems. Lavenders need to occasionally focus on their bodies, however, to take care of them. Balance is important for Lavenders.