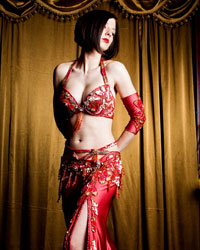 Reds are physical and sexual. They love expressing themselves through their sensuality and their physical bodies. They live their lives in the here-and-now with zest, strength, courage and self-confidence. Reds love to live in physical reality, to manipulate their environment. Reality must be tangible to them. They must be able to see, touch, hear, taste and smell it. Reds are not abstract thinkers. A wall is a wall and there is no need for further discussion or speculation. Reality is literal, not ethereal or complicated. Reds require proof that something exists. It must have a concrete and tangible substance. Reds remind us that we have bodies, that we are matter — flesh and blood. These robust personalities enjoy the physical aspect of life. They don't try to see life as an illusion or try to escape from it into a fantasy world.

Reds are usually robust personalities who enjoy the physical aspects of life. They live their lives in the here-and-now with zest, strength, stamina, courage, and self-confidence. Reds love to live in physical reality, to manipulate their environments. Reality must be tangible to them. They love expressing themselves through their sensuality and their physical bodies. Most Reds are practical, realistic, hardworking, and action oriented. Reds can be refreshingly honest and outspoken or brutally abrupt in their interactions. Other Reds are sensuous; they enjoy pampering and the finer things in life. Life is to be fully enjoyed with passion and a full appreciation of all the physical senses. In power, Reds are usually loyal, honest, and trustworthy. They are slow to anger. When they do get angry, they get over it quickly and do not hold grudges. Reds who are out of power, however, can become angry, easily frustrated, and physically explosive. When Reds are in power, they find more appropriate outlets for their energy and anger, such as exercise or sports. It takes a very strong, independent, self-realized person to handle the fiery personality of a Red. Reds tend to be very compelling, forceful, and potent. Some people enjoy the Reds' power and strength. They also love the challenge and the excitement that the sensual or highly physical Reds add to their lives. Reds need partners who are loyal, but also strong and self-realized. Examples of Reds are: Marilyn Monroe, singer Madonna, Pamela Anderson, Sean Penn, Russell Crowe, and Mike Tyson.

Reds’ life purpose is to live in the physical world with gusto, strength, and stamina. They are strong-willed, powerful, down-to-earth, hard-working, and highly physical people. Reds prefer to accomplish physical goals, projects, or feats and to take physical action to bring ideas and plans into form. They also want to enjoy life with all the basic pleasures it has to offer – food, drink, sex, and other physical gratifications. Reds enjoy physical work and often become athletes, physical trainers, dancers, models, surgeons, firefighters, bodyguards, lifeguards, police officers, bartenders, truck drivers, and construction workers.

Anyone who is going to spend quality time with Reds will need to be healthy and in great physical shape. Most Reds enjoy strenuous, robust activities. They prefer partners who have strength, stamina, and vitality. There are the traditional, hardworking, salt-of-the-earth Reds, as well as the zesty, hot-blooded, physically passionate lovers. The strong-willed Reds are happiest with partners who are highly physical, independent, trustworthy, and self-sufficient, with a strong sense of self-worth.

Reds prefer jobs that allow them to move or work with their bodies, that require physical exertion, and that have immediate, tangible results. They do not want to wait for something to happen. They prefer to feel they have control over the outcome. Many Reds prefer to be independent or self-employed, to have jobs that allow them control over their time and energy. They want jobs in which they can see they have accomplished something real and physical. Because many Reds are so powerful and rugged, they have great respect for the power and magnificence of nature, and they often appreciate being able to work outdoors. They also enjoy the challenge of being courageous in dangerous situations. Reds are frequently drawn to occupations such as the following: Firefighter, Dancer, Rescue worker, Model, Police, Surgeon, Military personnel, Butcher, Football player, Tractor driver and farmer, Boxer, Furniture mover, Bodyguard, Bartender, Truck driver, Waitress, Waiter, Equipment operator, Singer, Roadie and Stage Crew, Mechanic, Construction worker, Repairperson, Shop foreman, Occasionally, Reds like Marilyn Monroe (Red/Yellow), Madonna, Lady Gaga, Mae West, Dolly Parton, Sean Penn, and Russell Crowe show up in the entertainment business.

Most Reds do not strive to be rich. They are the “salt of the earth” and hard workers who handle their money proficiently. Money is not that important to them. As long as their basic needs are met and they have some creature comforts, they are content. Their lives are not ruled by material possessions. They don’t usually worry about money because they know they are self-sufficient. They can always find jobs that can make them enough money to survive. They see money as a real and tangible necessity, but not as something that rules their lives. However, some Reds prefer to be pampered. These Reds like having nice things and physical comforts— nice clothes, luxurious furniture, quality homes, and lavish vacations. They can be very sharp and adept in business – and then enjoy their wealth with luxury and extravagant creature comforts. Success Success for Reds is measured tangibly. They look for immediate and concrete results from their labor. They love to take action and to bring a plan or idea into physical manifestation. Success is having the courage, energy, and stamina to overcome or manipulate their physical environment and to be in their best possible physical condition.

Health problems for Reds are more often from over-exertion rather than from emotional stress. Because Reds usually work in professions and jobs that require physical strength and stamina, they typically suffer from physical injuries. They may experience hernias or backaches from lifting too much, cut fingers from a butcher’s knife, burns from a fire, concussions from boxing, broken bones from playing football, or pulled muscles from dancing or physically training too long. Especially in their youth, the strong-willed and robust Reds consider themselves physically invincible. They typically work and play full out – pushing their bodies and physical abilities to the limit. To stay physically healthy, Reds need to learn when enough is enough, when not to push things too far. They need to gauge their fervor when accomplishing a task. They also need to moderate their physical appetites. Because Reds love all sensual, animalistic pleasures, they can become overly addicted to food, alcohol or sex. Learning moderation and self-discipline is crucial to a Red’s physical well being. Their strong desire for immediate gratification can get them into trouble. Reds do not like to be considered weak – so challenging them to be powerful enough to maintain control over their lusty natures can be one way to get them to modify their behavior. They don’t like being told what to do, to be pressured, manipulated by guilt, threatened into behaving or being forced to suppress their natural desire for physical pleasures – so it has to ultimately be their decision. If you force them, they will eventually blow up or rebel. Another common trait for Reds is their quick temper. They will often react without thinking and angrily strike out at someone or something. When there is a problem, Red want to take physical action to remedy the situation. However, physically reacting isn’t always the best solution. Physical fights can be a frequent event in a Red’s life. Putting themselves in harm’s way and risking retaliation isn’t the best way to stay healthy. A more appropriate way for Reds to handle this type of volatile energy is to find some physical outlet such as hitting a punching bag, boxing, kick boxing, running, or some other sport that can satisfy their need to release this energy. Bottom line, finding enjoyable but appropriate outlets for releasing the Reds’ incredible energy and curbing their often times excessive physical appetites are important in maintaining their health.