Michael Grosso, “The Man Who Could Fly: St. Joseph of Copertino and the Mystery of Levitation”

Michael Grosso, “The Man Who Could Fly: St. Joseph of Copertino and the Mystery of Levitation”

St. Joseph began having mystical visions at the age of seven, but it was not until he began practicing his faith as a Franciscan priest that he realized the full potential of his mind’s power over his body—he was able to levitate. Throughout his priesthood, St. Joseph became famous for frequent levitations, which were observed on hundreds of occasions and by thousands of witnesses, including many skeptics. Michael Grosso delves into the biography of the saint to explore the many strange phenomena that surrounded his life and develops potential explanations for some of the most astounding manifestations.

The physics of levitation is a great mystery. However, modern physics may hold the answer. By pondering the mystery of levitation, psychokinesis, near death experiences, mediumship, and other paranormal experiences, science is forced to acknowledge the central role of mind in nature. This would imply breaking the paradigm that prevails in our modern technological society, and challenging our strong belief in materialism. Discover why consciousness is so important and what is occurring in our world today. Grosso hopes to help us gain a more vivid sense of the range and wonder of our own inner potential.

Grosso draws upon contemporary explorations into cognition, the relationship between the human mind and body, and the scientifically recorded effects of meditation and other transcendent practices to reveal the implications of St. Joseph’s experiences and abilities. 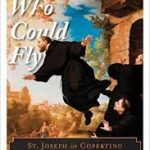